This configuration note will help you to add some configuration on the Mediatrix gateways to contact a backup server in case of failure with the first one or to do load balancing. 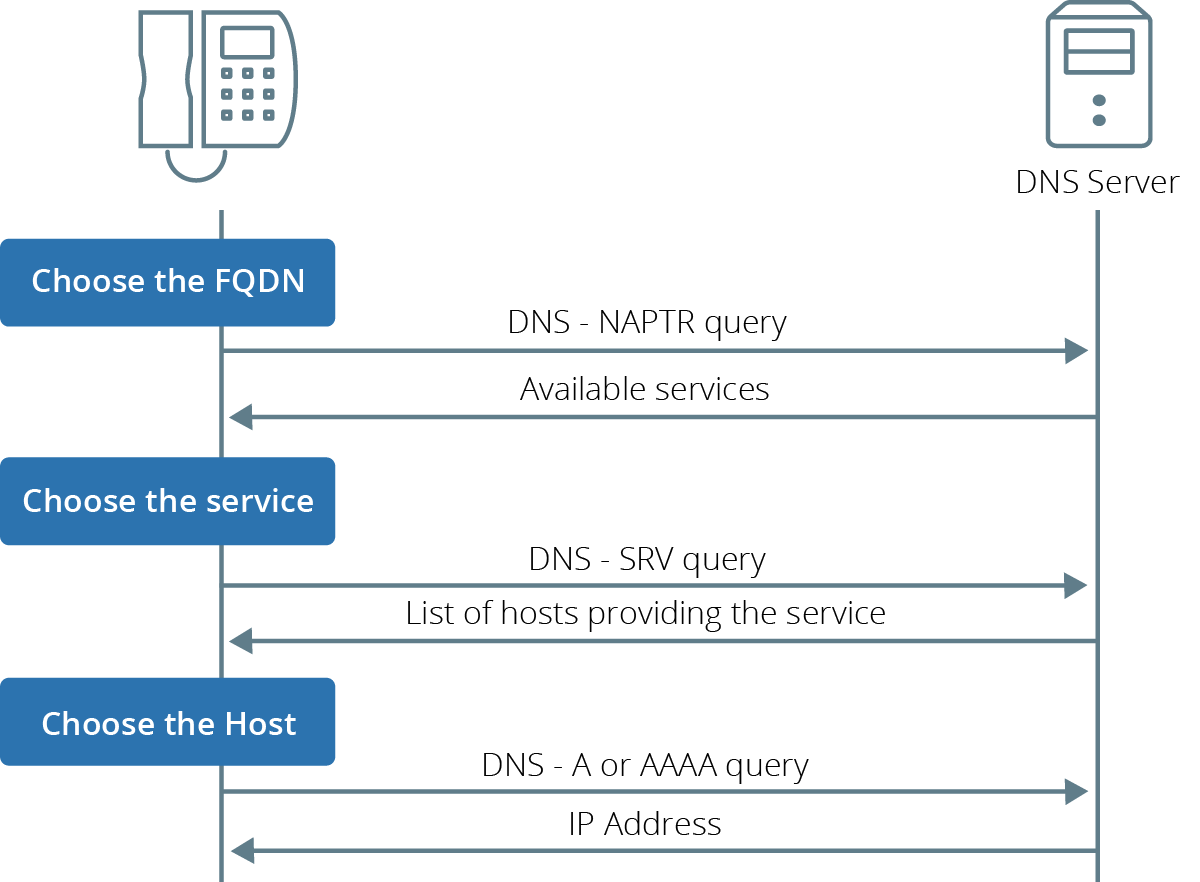 Note: The Mediatrix unit will keep the DNS responses it has received in cache for the remainder of the TTL field specified in the DNS response. If you make modifications to your DNS server configuration and want the Mediatrix unit to reissue DNS requests before the end of the TTL, you will need to enter the following command in the CLI or SNMP: Hoc.ClearDnsCache
If any of the SIP server parameters corresponds to a FQDN that is bound to a SRV record, the corresponding port must be set to 0 for the unit to perform DNS requests of type SRV (as per RFC 3263). Otherwise, the unit will not use DNS SRV requests, but will rather use type A requests because it does not need to have a specified port. We now look at the two types of DNS queries.
Top

DNS SRV is an extension of the standard DNS server specification (independent from SIP, as per RFC 2782). SRV (Service Record) is a type of entry a network administrator may put into the DNS server. A DNS SRV request is used to get one or more IP addresses of servers, each one having its own weight, priority and possible port.

Each entry received when using DNS SRV, depending on its weight and priority, can be used as a primary or backup server or can be part of a load balancing system.

For instance, the client requests the SRV for SIP servers in some domain. The DNS server may return the A, B, and C addresses, which are all SIP servers. Each address has a weight and the client must choose one of those three addresses by using an algorithm that considers the weight.

To use DNS SRV, an administrator must set a service records (SRV) into the DNS servers available on the network.

If you specify a SIP port for the registrar and proxy, the Mediatrix unit will issue a type A query. In this example the requests are sent to server1.media5berlin.com for both the Registrar and Proxy, with the SIP port being 5060 for both.

Wireshark displays the answer to the query as a “type A” answer, which contains the IP address for server1.media5berlin.com. The Mediatrix unit then attempts to register itself to that IP address.

Type A Query to a SRV Record

The Wireshark capture shows no additional SRV query and no registration, why?

By specifying the SIP port to 5060, the unit makes a standard A query, and since media5berlin.com is configured as a SRV record, no address is returned. The symptom will be a failed registration with the message “Registrar Unreachable”.

As previously stated, setting proxy and registrar ports to 0 will make the Mediatrix unit issue a DNS request of type SRV.

At the bottom of the window you can see “Additional records” with server1.media5berlin.com and server2.media5berlin.com. Those are 2 valid type A FQDNs which are offered in the SRV response. If you wished to do so, you could also explicitly enter those FQDNs directly into your Mediatrix proxy configuration field (as done in Scenario #1).

Please note that a NAPTR query is done before the SRV query. NAPTR is used to find Transport method, UPD – TCP – TLS. The establishment of persistent (TLS) connections will not send NAPTR since the transport is already known.

A NAPTR query is made if:
Top

The Effects of Priority and Weight

In some rare cases you may have a SRV response where some servers are configured with equal priority. In that case, the clients will use the weight values to determine which host to use. If the weights are also identical, then 50% of the packets will go to host 1 and the rest to host 2 (in a 2 server scenario). In this example, both proxy1 and proxy2 have the same priority, but different weights. 51% of the packets will go to proxy1 and 49% to proxy2.

This variable can be used to get around the above-mentioned issue. Setting this variable to “enable” makes the Mediatrix unit “stick” to the IP address associated with the initial Call-Id of the REGISTER or INVITE.

If using DNS SRV and multiple entries are present, this value is the time spent waiting for answers from each entry when one server is unreachable or unresponsive. The default value of this variable is 32 seconds. It has a dramatic effect should a server time out, since a default 32 seconds delay would be introduced at every call.

A maximum value of 2-3 seconds is recommended when using DNS SRV.

This document contains information that is proprietary to Media5 Corporation.

Media5 Corporation reserves all rights to this document as well as to the Intellectual Property of the document and the technology and know-how that it includes and represents.

This publication cannot be reproduced, neither in whole nor in part, in any form whatsoever, without written prior approval by Media5 Corporation.

Media5 Corporation reserves the right to revise this publication and make changes at any time and without the obligation to notify any person and/or entity of such revisions and/or changes.